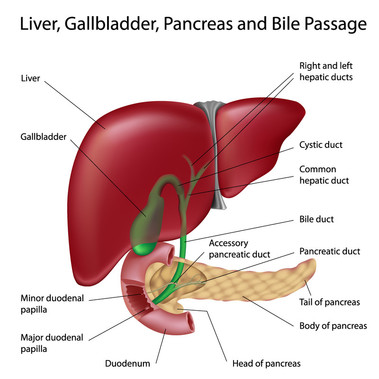 May Include any or all of the following: 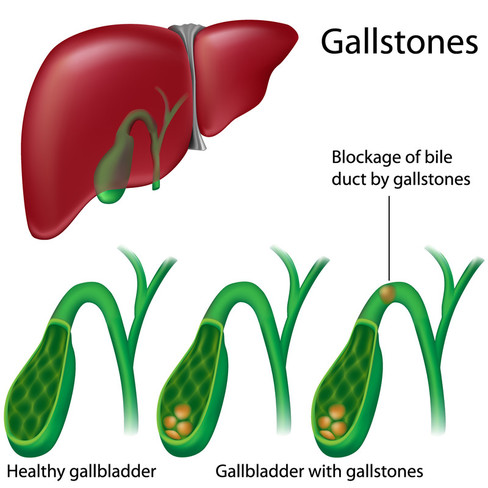 WHAT IS THE BILIARY TRACT?

The biliary tract consists of the gallbladder and the bile ducts. The bile ducts carry bile and other digestive enzymes from the liver and pancreas to the duodenum—the first part of the small intestine.
The liver produces bile—a fluid that carries toxins and waste products out of the body and helps the body digest fats and the fat-soluble vitamins A, D, E, and K. Bile mostly consists of cholesterol, bile salts, and bilirubin. Bilirubin, a reddish-yellow substance, forms when hemoglobin from red blood cells breaks down. Most bilirubin is excreted through bile.

Imbalances in the substances that make up bile cause gallstones. Gallstones may form if bile contains too much cholesterol, too much bilirubin, or not enough bile salts. Scientists do not fully understand why these imbalances occur. Gallstones also may form if the gallbladder does not empty completely or often enough.
The two types of gallstones are cholesterol and pigment stones:

WHO IS AT RISK FOR GALLSTONES?

Certain people have a higher risk of developing gallstones than others:2

Other factors that affect a person’s risk of gallstones include2

More information about these conditions is provided in the NIDDK health topic, Insulin Resistance and Prediabetes.
Pigment stones tend to develop in people who have

WHAT ARE THE SYMPTOMS AND COMPLICATIONS OF GALLSTONES?

WHEN SHOULD A PERSON TALK WITH A HEALTH CARE PROVIDER ABOUT GALLSTONES?

These symptoms may be signs of serious infection or inflammation of the gallbladder, liver, or pancreas.

HOW ARE GALLSTONES DIAGNOSED?

A health care provider will usually order an ultrasound exam to diagnose gallstones. Other imaging tests may also be used.

Health care providers also use blood tests to look for signs of infection or inflammation of the bile ducts, gallbladder, pancreas, or liver. A blood test involves drawing blood at a health care provider’s office or commercial facility and sending the sample to a lab for analysis.
Gallstone symptoms may be similar to those of other conditions, such as appendicitis, ulcers, pancreatitis, and gastroesophageal reflux disease.
Sometimes, silent gallstones are found when a person does not have any symptoms. For example, a health care provider may notice gallstones when performing ultrasound for a different reason.

HOW ARE GALLSTONES TREATED?

If gallstones are not causing symptoms, treatment is usually not needed. However, if a person has a gallbladder attack or other symptoms, a health care provider will usually recommend treatment. A person may be referred to a gastroenterologist—a doctor who specializes in digestive diseases—for treatment. If a person has had one gallbladder attack, more episodes will likely follow.
The usual treatment for gallstones is surgery to remove the gallbladder. If a person cannot undergo surgery, nonsurgical treatments may be used to dissolve cholesterol gallstones. A health care provider may use ERCP to remove stones in people who cannot undergo surgery or to remove stones from the common bile duct in people who are about to have gallbladder removal surgery.

A small number of people have softer and more frequent stools after gallbladder removal because bile flows into the duodenum more often. Changes in bowel habits are usually temporary; however, they should be discussed with a health care provider.
Though complications from gallbladder surgery are rare, the most common complication is injury to the bile ducts. An injured common bile duct can leak bile and cause a painful and possibly dangerous infection. One or more additional operations may be needed to repair the bile ducts. Bile duct injuries occur in less than 1 percent of cholecystectomies.5
Nonsurgical Treatments for Cholesterol GallstonesNonsurgical treatments are used only in special situations, such as when a person with cholesterol stones has a serious medical condition that prevents surgery. Gallstones often recur within 5 years after nonsurgical treatment.6
Two types of nonsurgical treatments can be used to dissolve cholesterol gallstones:

Factors related to eating, diet, and nutrition that increase the risk of gallstones include

People can decrease their risk of gallstones by maintaining a healthy weight through proper diet and nutrition.
Ursodiol can help prevent gallstones in people who rapidly lose weight through low-calorie diets or bariatric surgery. People should talk with their health care provider or dietitian about what diet is right for them. 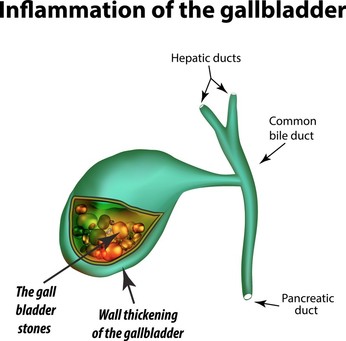 Your health care provider may order the following blood tests:

Tests that reveal gallstones or inflammation in the gallbladder include:

Surgery is the most common treatment. Surgery to remove the gallbladder is called cholecystectomy.

If you are too ill to have surgery because of other diseases or conditions, the gallstones may be dissolved with medicine you take by mouth. However, this may take 2 years or longer to work. The stones may return after treatment.

Information from the National Institute of Diabetes and Digestive and Kidney Diseases (NIDDK) ​https://www.niddk.nih.gov
For More Information you can also see ​https://www.facs.org/~/media/files/education/patient%20ed/cholesys.ashx

The information provided herein should not be used during any medical emergency or for the diagnosis or treatment of any medical condition. A licensed physician should be consulted for diagnosis and treatment of any and all medical conditions. Call 911 for all medical emergencies. Links to other sites are provided for information only — they do not constitute endorsements of those other sites

We Would Love to Have You Visit Soon!