Gastric bypass and other weight-loss surgeries make changes to your digestive system to help you lose weight by limiting how much you can eat or by reducing the absorption of nutrients, or both. Gastric bypass and other weight-loss surgeries are done when diet and exercise haven’t worked or when you have serious health problems because of your weight.

There are many types of weight-loss surgery, known collectively as bariatric surgery. Gastric bypass is one of the most common types of bariatric surgery in the United States. Many surgeons prefer lap gastric sleeve because it generally has fewer short term complications and less long term maintenance.

​Still, all forms of weight-loss surgery, including gastric bypass, are major procedures that can pose serious risks and side effects. Also, you should make permanent healthy changes to your diet and get regular exercise to help ensure the long-term success of bariatric surgery. 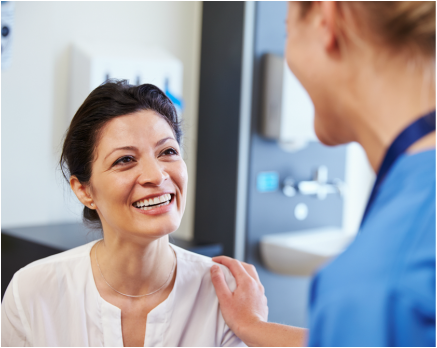 ​This surgery is an option for people who cannot lose weight by other means or who suffer from serious health problems related to obesity. The surgery restricts food intake, which can promote weight loss and reduces the risk of type 2 diabetes. Some surgeries also interrupt how food is digested, preventing some calories and nutrients, such as vitamins, from being absorbed. Recent studies suggest that bariatric surgery may even lower death rates for patients with severe obesity. The best results usually occur when patients follow surgery with healthy eating patterns and regular exercise.

Currently, bariatric surgery may be an option for adults with severe obesity. Body mass index (BMI), a measure of height in relation to weight, is used to define levels of obesity. Clinically severe obesity is a BMI > 40 or a BMI > 35 with a serious health problem linked to obesity. Such health problems could be type 2 diabetes, heart disease, or severe sleep apnea (when breathing stops for short periods during sleep).

WHO IS A GOOD ADULT CANDIDATE FOR SURGERY?

Having surgery to produce weight loss is a serious decision. Anyone thinking about having this surgery should know what it involves. Answers to the following questions may help patients decide whether weight-loss surgery is right for them.
Is the patient:

Bariatric surgery is sometimes used to treat youth with extreme obesity. Although it is becoming clear that teens can lose weight after bariatric surgery, many questions still exist about the long-term effects on teens’ developing bodies and minds.

WHO IS A GOOD YOUTH CANDIDATE FOR SURGERY?

Families should consider surgery only after youth have tried for at least 6 months to lose weight and have not had success. Candidates should meet the following criteria:

In addition, health care providers should assess potential patients and their parents to see how emotionally prepared they are for the surgery and the lifestyle changes they will need to make. Health care providers should also refer young patients to special youth bariatric surgery centers that focus on meeting the unique needs of youth.
Bariatric surgery can change both the weight and health of youth with extreme obesity. Over the years’ gastric bypass surgery has been the main operation used to treat extreme obesity in youth.

Normally, as food moves along the digestive tract, digestive juices and enzymes digest and absorb calories and nutrients. After we chew and swallow our food, it moves down the esophagus to the stomach, where a strong acid continues the digestive process. The stomach can hold about 3 pints of food at one time. When the stomach contents move to the duodenum (the first part of the small intestine), bile and pancreatic juice speed up digestion. Most of the iron and calcium in the food we eat is absorbed there. The other two parts of the nearly 20 feet of small intestine absorb nearly all of the remaining calories and nutrients. The food particles that cannot be digested in the small intestine reside in the large intestine until a bowl movement.

How does surgery promote weight loss?
Bariatric surgery restricts food intake, which can lead to weight loss. Patients who have bariatric surgery are encouraged to commit to a lifetime of healthy eating and regular exercise. These healthy habits may help patients maintain weight loss after surgery.

WHAT IS THE DIFFERENCE BETWEEN OPEN AND LAPAROSCOPIC SURGERY?

The type of surgery that may help an adult or youth depends on a number of factors. Patients should discuss with their health care providers what kind of surgery is suitable for them.
What is the difference between open and laparoscopic surgery? Bariatric surgery may be performed through “open” approaches, which involve cutting the stomach in the standard manner, or by laparoscopy. With the latter approach, surgeons insert complex instruments through 1/2-inch cuts and guide a small camera that sends images to a monitor. Most bariatric surgery today is laparoscopic because it requires a smaller cut, creates less tissue damage, leads to earlier hospital discharges, and has fewer problems, especially hernias occurring after surgery.
However, not all patients are suitable for laparoscopy. Patients who are considered extremely obese, who have had previous stomach surgery, or who have complex medical problems may require the open approach. Complex medical problems may include having severe heart and lung disease or weighing more than 350 pounds.

WHAT ARE THE SURGICAL OPTIONS?

There are four types of operations that are commonly offered in the United States: AGB, Roux-en-Y gastric bypass, biliopancreatic diversion with a duodenal switch , and vertical sleeve gastrectomy. Each surgery has its own benefits and risks. The patient and provider should work together to select the best option by considering the benefits and risks of each type of surgery. Other factors to consider include the patient’s BMI, eating habits, health conditions related to obesity, and previous stomach surgeries. 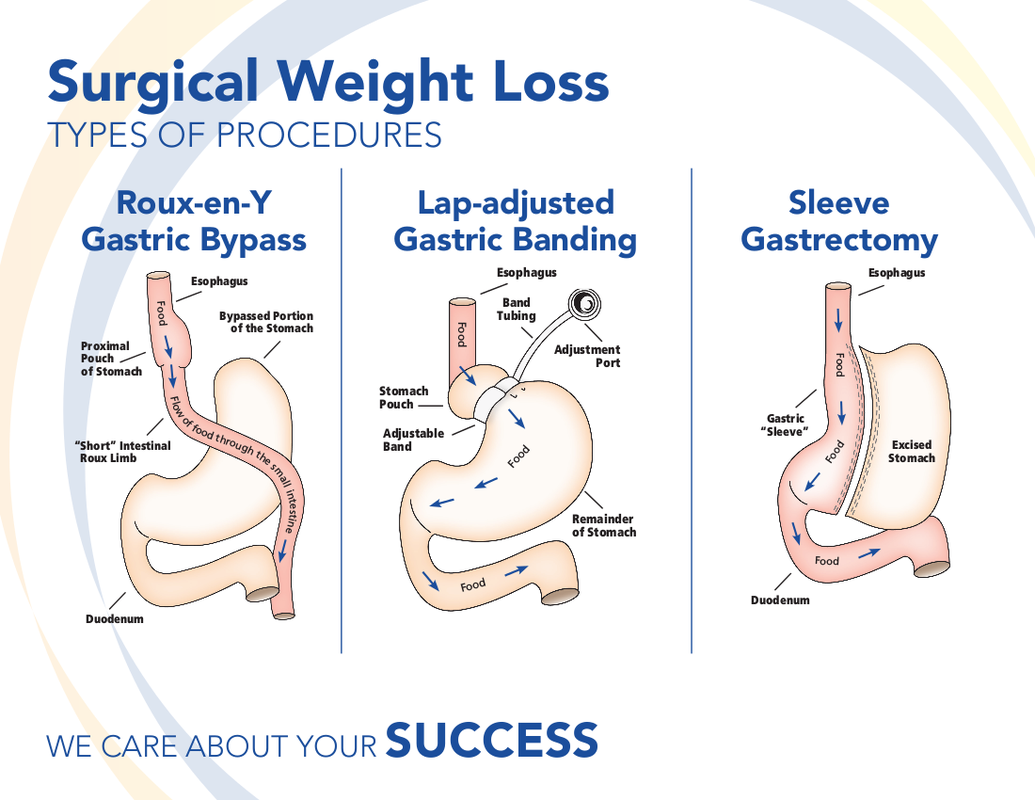 AGB works mainly by decreasing food intake. Food intake is reduced by placing a small bracelet-like band around the top of the stomach to restrict the size of the opening from the throat to the stomach. The surgeon can then control the size of the opening with a circular balloon inside the band. This balloon can be inflated or deflated with saline solution to meet the needs of the patient.

RYGB restricts food intake. RYGB also decreases how food is absorbed. Food intake is limited by a small pouch that is similar in size to the pouch created with AGB. Also, sending food directly from the pouch into the small intestine affects how the digestive tract absorbs food. The food is absorbed differently because the stomach, duodenum, and upper intestine no longer have contact with food.

BILIOPANCREATIC DIVERSION WITH A DUODENAL SWITCH

BPD-DS, usually referred to as a “duodenal switch,” is a complex bariatric surgery that includes three features. One feature is to remove a large part of the stomach. This step can make patients feel full sooner when eating than they did before surgery. Feeling full sooner can encourages patients to eat less. Another feature is re-routing food away from much of the small intestine to limit how the body absorbs food. The third feature changes how bile and other digestive juices affect the body’s ability to digest food and absorb calories. This can step also help lead to weight loss.
In removing a large part of the stomach, the surgeon creates a more tubular “gastric sleeve” (also known as a VSG, discussed later). The smaller stomach sleeve remains linked to a very short part of the duodenum, which is then directly linked to a lower part of the small intestine. This surgery leaves a small part of the duodenum available to absorb food and some vitamins and minerals.
However, when the patient eats food, it bypasses most of the duodenum. The distance between the stomach and colon becomes much shorter after this operation, thus limiting how food is absorbed. BPD-DS can produce significant weight loss. However, a decrease in the amount of food, vitamins, and minerals absorbed creates chances for long-term problems.
Some of these problems are anemia (lower than normal count for red blood cells) or osteoporosis (loss of bone mass that can make bones brittle).

VSG surgery restricts food intake and decreases the amount of food used. Most of the stomach is removed during this surgery, which may decrease ghrelin, a hormone that prompts appetite. Lower amounts of ghrelin may reduce hunger more than other purely restrictive surgeries, such as AGB.
VSG has been performed in the past mainly as the first stage of BPD-DS (discussed earlier) in patients who may be at high risk for problems from more extensive types of surgery. These patients’ high risk levels are due to body weight or medical issues.

What are the side effects of these surgeries?

Some side effects may include bleeding, infection, leaks from the site where the intestines are sewn together, diarrhea, and blood clots in the legs that can move to the lungs and heart.
Examples of side effects that may occur later include nutrients being poorly absorbed, especially in patients who do not take their prescribed vitamins and minerals. In some cases, if patients do not address this problem promptly, diseases may occur along with permanent damage to the nervous system. These diseases include pellagra (caused by lack of vitamin B3—niacin), beri beri (caused by lack of vitamin B1—thiamine) and kwashiorkor (caused by lack of protein).
Other late problems can include strictures (narrowing of the sites where the intestine is joined) and hernias (part of an organ bulging through a weak area of muscle).
Two kinds of hernias may occur after a patient has bariatric surgery. An incisional hernia is a weakness that sticks out from the abdominal wall’s connective tissue and may cause a blockage in the bowel. An internal hernia occurs when the small bowel is displaced into pockets in the lining of the abdomen. These pockets occur when the intestines are sewn together. Internal hernias are thought to be more dangerous than incisional ones and need prompt attention to avoid serious problems.
Some patients may also require emotional support to help them through the changes in body image and personal relationships that occur after the surgery.

Disclaimer: Results are not guaranteed and may vary. The best results occur when patients follow surgery with healthy eating patterns and regular exercise.

We Would Love to Have You Visit Soon!